There are around 20 hours per week of yoga, singing and dance (depending on the individual course) leaving plenty of time to get to know your surroundings.
The area around La Roane is great walking and cycling country (bicycles available free of charge) with the spectacular Gorges de l’Aveyron just a mile away. For the experience of a lifetime, visit the Grotte Trasadou and La Dame Blanche, prehistoric caves that were used by resistance fighters during the last war.

Our local town, Saint Antonin Noble Val is 3 miles away; a magical medieval town, which retains its original charm. It boasts the oldest civic building in France, the 11th century Town Hall (now a museum), La Maison d’Amour (a medieval bath house, probably a brothel!), and it is the scene of a very colourful market every Sunday. It ranks in the top three most beautiful villages in France according to a French survey.

It was the setting of the film ‘Charlotte Grey’ with Cate Blanchett and the Spielberg film ‘The Hundred Foot Journey’ starring Helen Mirren.

Flowing though St Antonin is the River Aveyron, ideal for picnicking, swimming and, for the more adventurous, canoeing down the river. 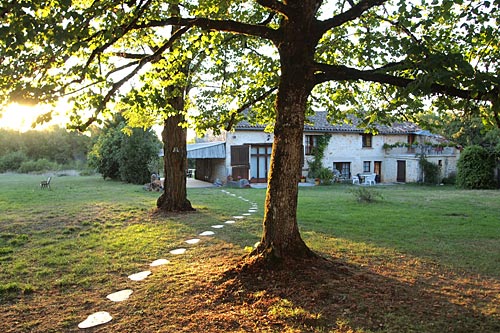 If you would like to order one or more brochures…

Many of our guests return regularly and have become friends, sharing pictures and comments on our Facebook and Instagram pages.